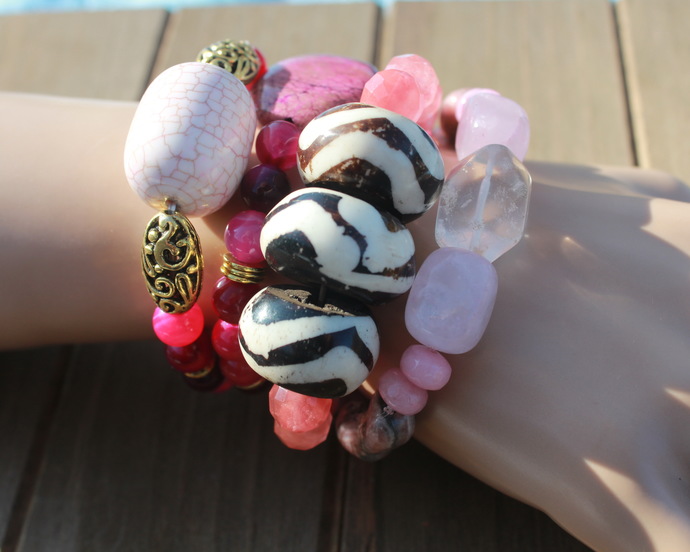 All natural gems from Mother earth herself, shades of pink with a splash of animal print.

If your looking for stunning one of a kind bracelets, you've found your stack!

This bracelet stack measures 6.5 inches, let me know if you need 7 inches.

Gorgeous Set with different sizes and textures.
Wear each alone or wear 2 or the whole stack of 4.

The allure of Rhodochrosite is undeniable, both for its raspberry-pink to rose-red color, and for the pulsating electrical energy of love it emits. While all pink stones promote unconditional love, Robert Simmons in The Book of Stones claims Rhodochrosite emanates one of the most tender and loving energies of any stone, soothing the heart, comforting the soul, and vibrating to the frequencies of inner peace. It is a marvelous talisman of joy and healing, of embracing one’s rightful powers and rising to one’s full potential. [Simmons, 328][Melody, 561][Lembo, 298-299]

Known as the Stone of the Compassionate Heart, Rhodochrosite symbolizes selfless love, moving one beyond mere empathy but stirring one to action on others’ behalf. Rhodochrosite, however, directs that love first toward the self for the specific purpose of emotional healing. By empowering one to earnestly examine old wounds, suppressed feelings, and traumas of childhood or past lives, it enables one to view old situations with new information, and allows one to acknowledge and release pain, along with destructive patterns of behavior one may have adopted as a means to cope. Its vibration of self-love, forgiveness and compassion for the child within, assists in reclaiming the self one was born to be. [Simmons, 328][Melody, 562][Hall, 244-245][Raphaell, 118-119]

The frequency of Rhodochrosite is surrounded by heavenly energies imbued with the golden sphere of Light, and emits not only the pink/red color rays of influence, but a harmonious blend of pink and light orange. It not only heals the Heart Chakra, but is described by Katrina Raphaell in Crystal Enlightenment as “the God-sent deliverer whose purpose and mission is to clear the solar plexus and integrate the energies of the physical and spiritual realms.” [Melody, 561][Raphaell, 117-119]

As the center of emotional activity and personal will, the Solar Plexus Chakra tends to record and store unresolved issues. Rhodochrosite frees blockages in this chakra, forming a vital bridge between the upper chakras of higher consciousness and the lower chakras of energy, restoring one’s sense of wholeness and confidence to use one’s will in creating one’s reality. Because it resonates so closely with the inner child, it helps one to reclaim joy and playfulness, creativity and innate talents that may have lain dormant. It inspires a dynamic and positive attitude, as well as a courageous heart capable of taking action to express love and emotions and to pursue one’s dreams.

Jade is said to bless whatever it touches, serving mankind across the globe for nearly 6,000 years. For primitive peoples in the British Isles, its toughness, and ability to polish and sharpen made it a favored stone for axe heads, knives and weapons. Indigenous tribes of Mexico, Central and South America, and New Zealand carved it into deity masks and ritual artifacts, even cast it into wells as an offering to the water spirits for fresh and plentiful water. Jade has been the most highly esteemed stone in China throughout recorded history, and was valued for its beauty and powers of healing and protection. An endless variety of gems, vessels, incense burners, beads, burial items and statues have been wondrously carved from Jade, as well as musical instruments and pendants inscribed with poetry. [Simmons, 210][Eason, 266, 268]

Jade is most valued for its metaphysical properties. It is the ultimate "Dream Stone," revered in ancient cultures, as well as today, to access the spiritual world, gain insight into ritualistic knowledge, encourage creativity, and dream-solve. [Melody, 341][Raphaell, 161] It is cherished as a protective talisman, assuring long life and a peaceful death, and is considered a powerful healing stone. [Mella, 87] An amulet of good luck and friendship, Jade signifies wisdom gathered in tranquility, dispelling the negative and encouraging one to see oneself as they really are.

The fair and lovely Rose Quartz, with its gentle pink essence, is a stone of the heart, a Crystal of Unconditional Love. It carries a soft feminine energy of compassion and peace, tenderness and healing, nourishment and comfort. It speaks directly to the Heart Chakra, dissolving emotional wounds, fears and resentments, and circulates a Divine loving energy throughout the entire aura. Reawakening the heart to its own innate love, it provides a deep sense of personal fulfillment and contentment, allowing one the capacity to truly give and receive love from others. [Raphaell, 82-85][Simmons, 331][Hall, 236]

Called the Heart Stone, Rose Quartz may have been used as a love token as early as 600 B.C. and is still an important talisman of relationships. It is quite effective in attracting new love, romance and intimacy, or in developing a closer bond with family or friends. It supports connection within groups and community, and carries a high spiritual attunement to the Earth, Universe, and the Divine. [Eason, 50][Simmons, 331][Hall, 236]

Rose Quartz also inspires the love of beauty, in oneself and others, in nature, and especially that which stimulates the imagination - art, music and the written word. [Melody, 570] Prized in the ancient world for its powers of physical beautification, facial masks of Rose Quartz have been recovered from Egyptian tombs, thought by the Egyptians and Romans to clear the complexion and prevent wrinkles. It was also a stone honored by the Tibetan and Oriental cultures, and continues to be one of the major carving stones of China.

Agate is the name given to numerous varieties of banded Chalcedony, a mineral of the Quartz family. Its name comes from the Achetes River in Sicily, where Agates were first found. Usually banded in layers, or stripes, some varieties have "eye" markings, or specks of color, some have fossilized inclusions, and others are solid. Called the earth rainbow, the concentric bands of Agate form in nearly every color the earth can produce, including a colorless form.

Historically, Agate has been discovered with the artifacts of Neolithic people, and was used as healing amulets and ornamentation dating back to Babylon. Its medicinal uses continued through the ancient Greek and Egyptian civilizations, and spread throughout Africa and the Middle East into Russia. Agate sparked a world renowned stonecutting and polishing industry in Germany that flourished from the 15th to the 19th century, and exists today. [Simmons, 6][Mella, 67-68]

Metaphysically, Agate has a lower intensity and vibrates to a slower frequency than other stones, but is highly regarded as a stabilizing and strengthening influence. [Simmons, 6] The layered bands of microscopic quartz in Agate may appear delicate, they are actually very strong. Agate is excellent for balancing emotional, physical and intellectual energy, and in harmonizing yin and yang, the positive and negative forces of the universe. [Hall, 39] 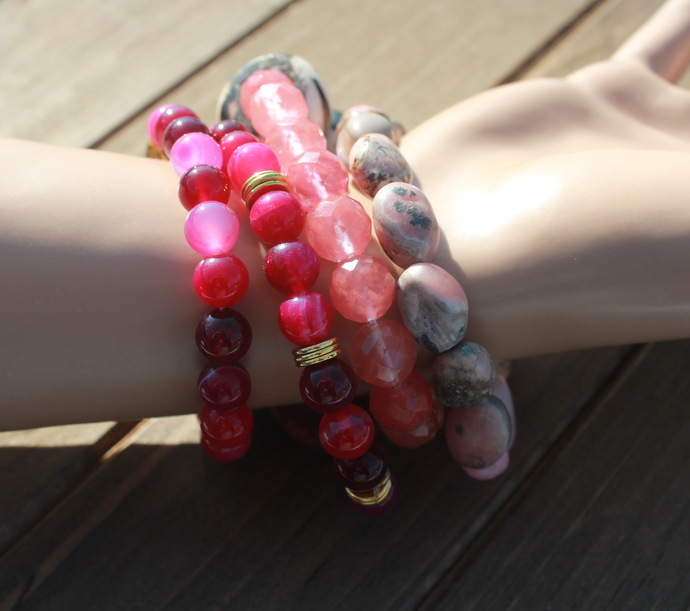 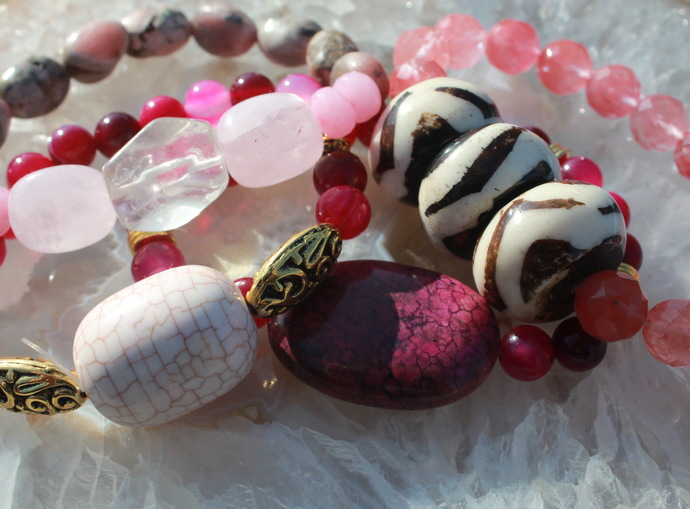 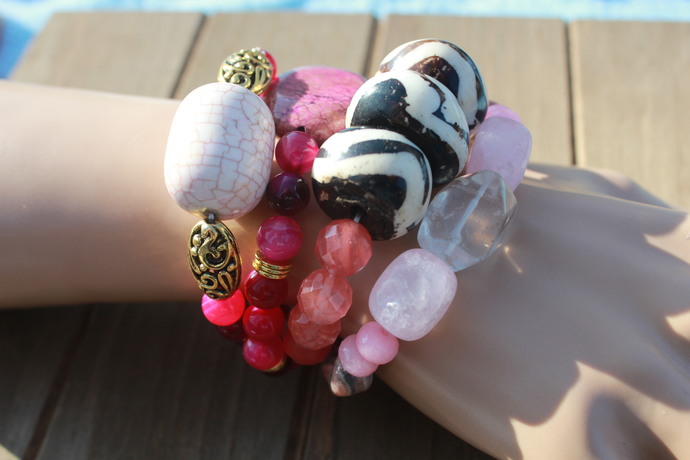 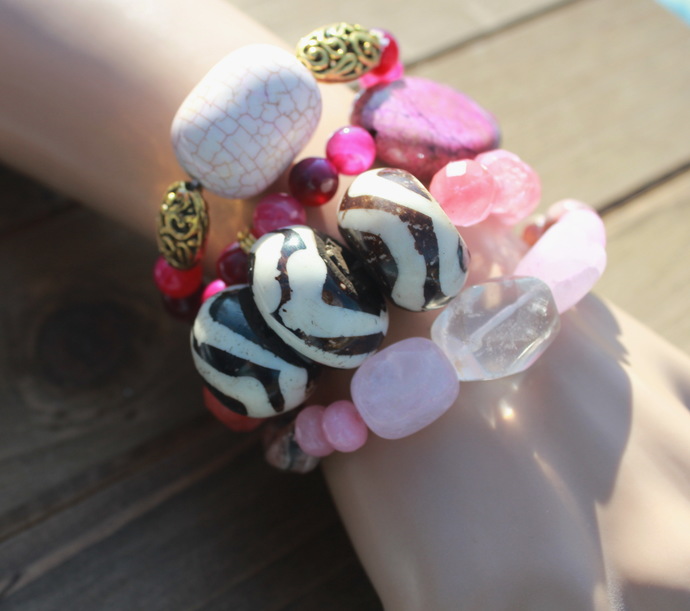 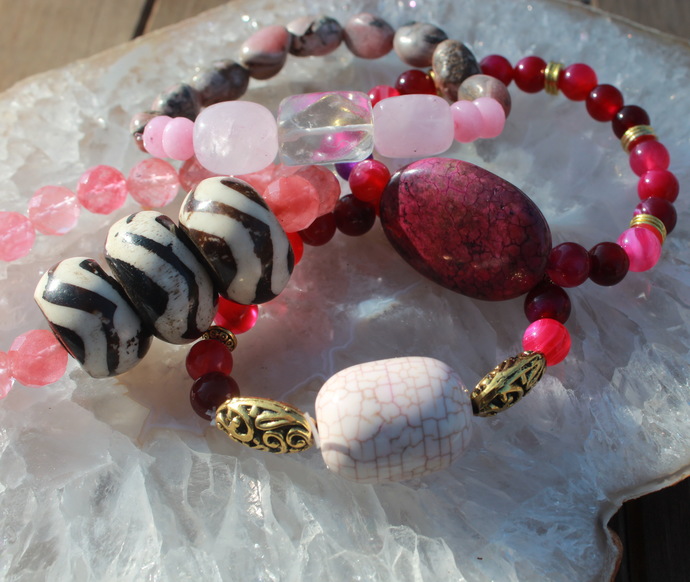 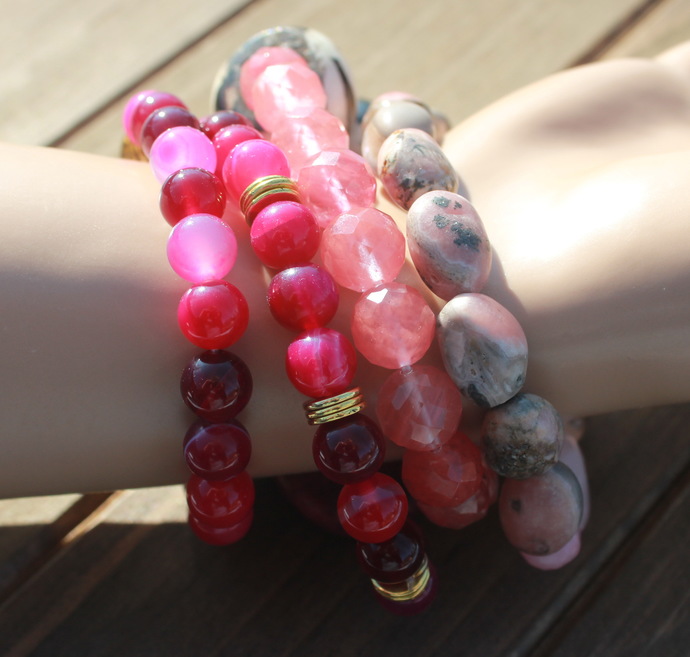 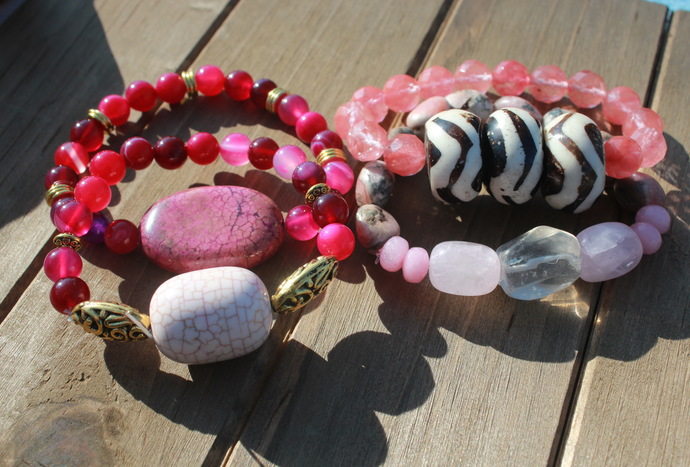